I’ve noticed more than once that some programmers are confused about the direction in which the stack grows on x86, and what “top of the stack” and “bottom of the stack” mean. It appears that this confusion is caused by a basic mismatch in the way people are used to thinking about stacks, and in the way the stack on x86 actually behaves [1].

In this article, I intend to resolve this confusion with a few helpful diagrams.

Back to the basics. The stack analogy is sometimes demonstrated to new students of computing with a stack of plates. You push a plate onto the stack and pop a plate off the stack. The top of the stack is where your next plate goes when pushing, and from where you take a plate when popping. 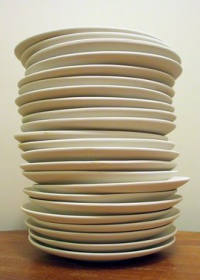 Herein lies the source of the confusion. Intel’s x86 architecture places its stack “head down”. It starts at some address and grows down to a lower address. Here’s how it looks: 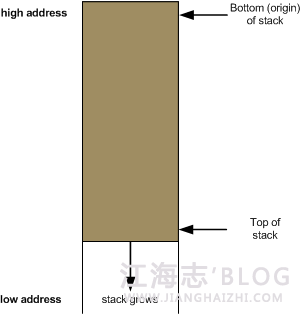 So when we say “top of the stack” on x86, we actually mean the lowest address in the memory area occupied by the stack. This may be unnatural for some people [2]. As long as we keep the diagram shown above firmly in mind, however, we should be OK.

While we’re at it, let’s see how some common idioms of x86 assembly programming map to this graphical representation.

Pushing and popping data with the stack pointer

The x86 architecture reserves a special register for working with the stack – ESP (Extended Stack Pointer). The ESP, by definition, always points to the top of the stack: 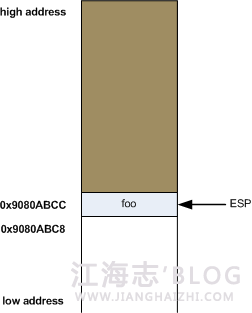 To push new data onto the stack we use the push instruction [3]. What push does is first decrement esp by 4, and then store its operand in the location esp points to. So this:

Is actually equivalent to this:

Taking the previous diagram as the starting point, and supposing that eax held the venerable value 0xDEADBEEF, after the push the stack will look as follows:

Similarly, the pop instruction takes a value off the top of stack and places it in its operand, increasing the stack pointer afterwards. In other words, this:

Is equivalent to this:

So, again, taking the previous diagram (after the push) as a starting point, pop eax will do the following: 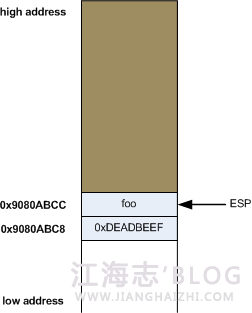 And the value 0xDEADBEEF will be written into eax. Note that 0xDEADBEEF also stays at address 0x9080ABC8, since we did nothing to overwrite it yet.

When looking at assembly code generated from C, you will find a lot of interesting patterns. Perhaps the most recognizable pattern is the way parameters are passed into functions using the stack, and the way local variables are allocated on the stack [4].

I’ll demonstrate this with a simple C program:

Both the arguments passed into foobar and the local variables of that function, along with some other data, are going to be stored on the stack when foobar is called. This set of data on the stack is called a frame for this function. Right before the return statement, the stack frame for foobar looks like this: 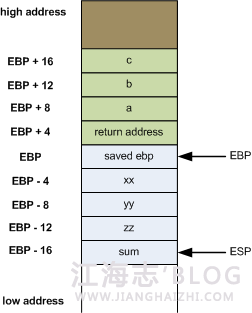 The green data were pushed onto the stack by the calling function, and the blue ones by foobar itself.

Compiled with gcc into assembly as follows:

The following assembly listing is generated for foobar. I commented it heavily for easy understanding:

Since esp keeps moving as the function executes, ebp (base pointer, also known as frame pointer in other architectures) is used as a convenient anchor relatively to which all function arguments and locals can be found. Arguments are above ebp in the stack (hence the positive offset when accessing them), while locals are below ebp in the stack.